On Sunday the 7th July the Tour de France will start her in old Blighty; the prologue taking place around London with Stage 1 on Sunday starting in London and heading 190km down to Canterbury. Last Sunday was the turn of the dedicated, serious or down right sucidical cyclists out there in the world. The British Cyclosportive was the chance for every day cyclists to have a go at the very same stage the pro will tackle seven days later. Spaces on this event are limited to only 5,000 riders but Viv and I applied back in February and had secured our places. It was a very early start, we needed to sign on in Greenwich Park before 6 in the morning for a start time of 6:30. This meant that we needed to leave Viv’s house at 4 in the morning to ensure we got to the big smoke in time. The good news is that at this time in the morning the roads are pretty much our own, meaning we could make really good time; despite the Dartford bridge being closed and not being able to get on the A2 to get into London!

After some expert map reading we arrived, only to park next a car of riders from Ipswich!

We walked into the park to find the registration tent and sign on. Upon arrival we were given a package containing a promotional tee, some literature and a transponder for our bikes. This clever device sits on your front wheel and will acrruately measure the times we set. Enough of this time for a cup of tea and possibly a bacon sandwich. After fueling ourselves we finally got our bikes ready and put some spare clothes on a transport lorry to be delivered to the finish line awaiting our arrival. By this time they had started sending riders off; the plan is to send of around 40 riders every minute from 6 – 8:30. We finally hit the start line at around 6:40, making us about 1400 in the field. When the count down finished we were off. There was a quick tour of the park and then we finally made it out onto the main roads and on our journey down into Kent to to Canterbury. The first thing to note was that unlike in the real tour the roads remained open, so we should have been following the Highway Code and all that. Well I did start off doing this, the first set of traffic lights on red I eased on the brakes and set about stopping. However a seasoned pro behind told me to keep going, not convinced I continues to slow down. At that point the chap behind and 20 others just shot across the junction bringing the traffic to a stop. I of course decided that there was safety in numbers and joined them. It took a while to get used to this but I think when the motorists were confronted with this many cyclists I think backing down was the only option. Man it felt good, for all the times that a car cut me up or did not give me enough space when overtaking; revenge was sweet that day!

The route took us out and through Dartford, where we could see the afore mentioned closed Queen Elizabeth Bridge. After Dartford came Gravesend, where Viv’s nan used to live; well you have got to pass the time some how. Soon the residential areas and industrial zones were replaced by trees and fields; we were finally rolling through Kent. I’ve never ridden in Kent and was not truly aware of just how hilly it can be, I knew that the course was going to take in three Category 4 climbs but when the first come upon us I was not really ready. Suddenly memories of the Wild Wales Challenge flooded back and I found myself changing riding styles. Attach those hills, this is the UK they are not going to be never ending Vontoux mountain stages, just a blast of increased incline. This did pay off as I was to cope with the hills, of course there was a bit of easy spinning at the tops just to shift that lactic acid from the legs. But the good thing about a hill climb is that at the top there will always be a down hill, and 9 times out of 10 it was worth the effort. One of my best memories of this ride was sitting on the drops in top gears tearing down the road at 65kmph. That said I did find myself in a miniature peleton and suddenly realised that I was being whisked along at 55kmph by the group; not even pedaling! 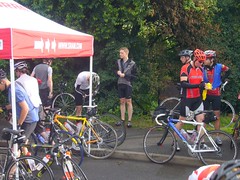 After a while Viv and I were happy to see a sign to advise of the upcoming food stop. Desipte all our efforts I do not think we could have gone the entire day without stopping so we planned on at least three stops. The first stop was around 40km so we pulled in to find that food, drink and even mechanics were laid on for us, of course it was a bit of a panic stations so I opted to just stand clear and enjoy some strange ‘School Bars’ fruit things. Feeling refreshed we set off again, the next 30km saw another food stop which we opted to miss out on; it was too soon after the first. This section saw another classic descent into Wateringbury, at the bottom of the road was a set of traffic lights (promptly ignored) which took us into the main high street, the pace was high until residents and pedestrians were waving for us to slow down. Around the next corner we saw why, a rider had missed placed the corner some how and was in a messing looking heap in the side of the road; blocking half the carriage way. As we passed I saw what was a suspected broken collar bone; common cycling injury. Undeterred by this we upped the pace again, despite the rain that was now falling. We pressed on until the signs for the next feed station. This station was around 75km. Once again Viv tucked into some Soreen malt loaf cereal bars, not being a malt loaf fan I stuck to my School Bars. Once again we were back on the road and heading into a rain heavy head wind. I managed to find a rider of a similar cadence and between us we worked together for a few miles, until I realised that once again I had lost sight of Viv; you should never leave your wingman! I eased back and soon saw him again. Once again team CC Sudbury were off. The second Category 4 climb took place in Goudhurst. During the climb through the main village Viv turned to me and told me this is the place he is coming to on Sunday to watch the race. It would be the perfect place, the riders will be slightly slower; not as much as us, but enough to get a few snaps of the pros. It might have been the lack of sunshine or just down right tiredness but the next few miles are now a bit of blur. I do remember feeling a bit wasted so I started into the gel bar’s trying to get some quick energy fixes. I guess it must have worked as we soon entered Ashford and our third and final food stop. I made sure to replenish the gel bars in my pockets and spent a few minutes working out some times in my head. Previously Viv had estimated around 9 hours to complete the 190km. If we kept up our current pace we were going to smash that by a long way. With this in mind we set off again knowing we had broken it’s back and it was all down hill from here, well metaphorically speaking that is. Especially when we found ourselves at the foot of the final climb. This climb was a narrow country lane with trees either side, the surface was wet and the pace was slow. Once again I set about my ‘attack the hill’ mode and soon found a nice rhythm that enabled me to make some places up. However I will warn the pro’s of the man hole cover just left of centre half way up; hit that and the back wheel will spin out from you. When I reached the peak I was greeted by a massive cross wind that whipped around my Easton wheels causing some crazy swerving across the road. Viv soon joined me and we swapped stories of that man hole cover which we both hit and slipped on. Looking down at my computer I knew that there was not long left. Looking at the road ahead I noticed it was straight with a slight descent. The competive edge kicked in and the paced was increased, I soon realised that I had created a little break away with 6 or so riders sitting on my wheel. I kept the pace up but was getting frustrated with other for not sharing the load, to which when the next rider came into view I tucked in behind them and slowed down. Soon some one made the break and it was my turn to draft and sit on the wheel. As I sat there I know there was only 20-30km to go and the road looked down hill. I was not going to be sucked into that old trap; a final sting in the tail of the course. Little did I know that it was all down hill from there, in fact I soon ended up in top gear again powering my way into Canterbury. Suddenly there we Police directing us into a separate lane; knowing the end was near I jumped on the drops and really powered down, now or never style! I was coming in at such a pace that I totally missed the finished line and the marshal had to jump out the way as a skidded to a holt realising it was all over. 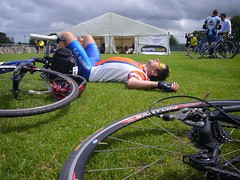 The riders were ushered through a check in tent where the transponder was returned, I made my way out to wait for Viv; who arrived not long after. Now the most important thing in our mind was to find some where to sit down and get a cup of tea. Not being one to sit still for too long we were off again to collect our clothes, drop the bikes off and catch a bus back to London. On the bus I was able to reflect on the days ride and put some figures together for the journey. My computer clocked a total ride time of 6:51minutes. With a total distance of 189.89km (most remember to calibrate that) an average speed 27.3km/h. Since completing the ride I have checked the Everyday Cycling website and downloaded the finish times, I clocked in at 7hours 27minutes; that was the total time and after some quick calculations I reckon I placed about 1520th. Not bad for a first attempt, especially as the quickest were setting times just over 5 hours!